Our next interview in this popular series was graciously given by one of the cornerstones of the Armagh Theatre Group- Malcolm Dawson.

He reminisced with this interviewer in his Donegal hidout while the sun shone on the lapping waves of Sheephaven Bay. Pint of Guinness in one hand and a Doherty's sausage bap in the other, served by his adoring wife Sheila.

Here are the outworkings of that indepth conversation.

Job/Career; .Retired (15 yrs ago!!) Was involved in Horticultural and renewable energy research for the Ministry of Agriculture – at least that was what it was called when I joined in 1968.

ATG Member since:.1970.- only realising as I write this that it has been 50 years and so many great memories - Claremorris Confined drama finals the hotel if it could be called that and a chef so drunk from the previous night with us that we had to cook breakfast. Jim O’Neill making an early entrance on stage complete with umbrella and fairy lights and retreating quietly. Father Joe insisting on complete accuracy with the script lines – not good for me - I could go on and on.

Why did you join; Liked the parties in the Loft in Jenny’s Row –still link Harry Mc Geough’s rendition of Leaving on a jet plane with some of the best nights there. No really I was involved at school in set design etc but not on stage and wondered what it would be like to be an ‘actor’- Never really found out!!!

1st production On stage: Seamus Mallon’s last production The Evangelist I was the street preacher who left the stage distributing tracts to the audience between acts I and II. Still remember the first lines (something I’m not necessarily noted for) “The wrath of God will be called down on the children of disobedience”.

First Production as producer: Silent Voices a one-act about the poet Francis Ledwidge and his final demise in the trenches in 1917 a challenge which I really enjoyed – thank you Margery Quinn David O’Toole Kevin McEaneny and Maryln White- it led on to many more each with their unforgettable memories.

1st producer/director;. .As above Seamus Mallon but was taken over by Patrick Shields (him of Tasmania) when Seamus became involved in politics.

Favourite theatre performed in;. Has to be the Patrician Hall in Carrickmore first for discomfort for both cast and public (don’t flush the toilet while actors are on stage) but also first for hospitality. Unfortunately but sensibly the free bar in the dressing room was discontinued. Possibly after my appearance as Willie in Home is the Hero with the Benburb Players where I appeared with Paddy Brolly an unforgettable experience. I left Carrickmore the following morning with a lift from the milkman. I also recall an Edwardian Restoration Comedy – The way to Keep Them- when after act one two members of the audience had this brief conversation overheard by one of the Group “ well Mary what do you think to which Mary replied I’ll not be back it is a load of shite!!!

Favourite play and part; The Shadow Box one of Father Joe’s productions for us. I played one of the three people who were patients in a hospice – waiting - and being visited by family. My son in the play was a twelve year old John Paul Connolly who gained theatrical fame before his real fame in London and Broadway by using the “F” word on stage.

Biggest achievement on stage: Remembering my words often not necessarily in the right order but I usually remembered the cue line.
Wine or beer; Yes please wine and beer to be precise Argentinian Malbec and any microbrewery craft beer currently Twisted Hop from the Hilden Brewery in Lisburn.

Drugs or therapy; Never did drugs- honestly and therapy never entered my conscious thinking till I did Shining City produced by Margaret Marjoram It was a real eye opener and whilst it scared the life out of me with the pages long monologues it had a real message.

Meat or Veg; Why do I have to choose? I like both definitely not vegan.

To entertain or be entertained;..There is a different excitement about both but if I have to choose I suppose provided things go well and there is a good feedback from the audience I would choose the entertain option.

Most embarrassing stage moment; there were many!! Two notable ones. Firstly in the Restoration Comedy The way to keep him where I had to read a long love letter which I hadn’t learned off as it was in a desk drawer on stage. However on one occasion it wasn’t there and I had to retrieve it from behind stage. A close second was in The shadow of a gunman when the bomb had gone off and Malachi and I had retreated under the blankets there was a long silence and I peered out to tell Malachi it was his line and he indicated ‘vigorously’ that it was mine As usual he was right!.

Favourite author/Playwright; Probably the one who was responsible for the play I was in or directing at the time. Again making a choice Arthur Millar All my Sons and Death of a Salesman both very strong plays and on the other end of the scale Bernard Farrell – who can forget the riotous comedy in Stella by Starlight, I do not like thee Dr Fell Happy birthday dear Alice and 44 Sycamore

Chocolate or Cakes;..Don’t have a sweet tooth but do like chocolate on occasions.

Fry or fruit;.Definitely fry but not too often.

Best Holiday destination;..Why do you ask? DONEGAL for the last 60 years.

Your party piece; .Used to have one but in sobriety when I discovered I couldn’t sing I gave it up.

Mantra-rules of life;. Live, love, laugh and be happy – don’t know who said it and I know it can’t be like that all the time but not a bad object to aim for.

Book/Play/Film recommendation; ..The book which made the most lasting impact on me was Long walk to freedom – Nelson Mandela’s biography.

Exercise choice;. Don’t do it – at my age really!! I get enough in the garden

Favourite Food;. .The one that cooked for me.

Hopes for ATG in 2026..To be still vertical and involved in the New revamped theatre in Abbey Lane with as Bridie said toilet facilities behind stage. 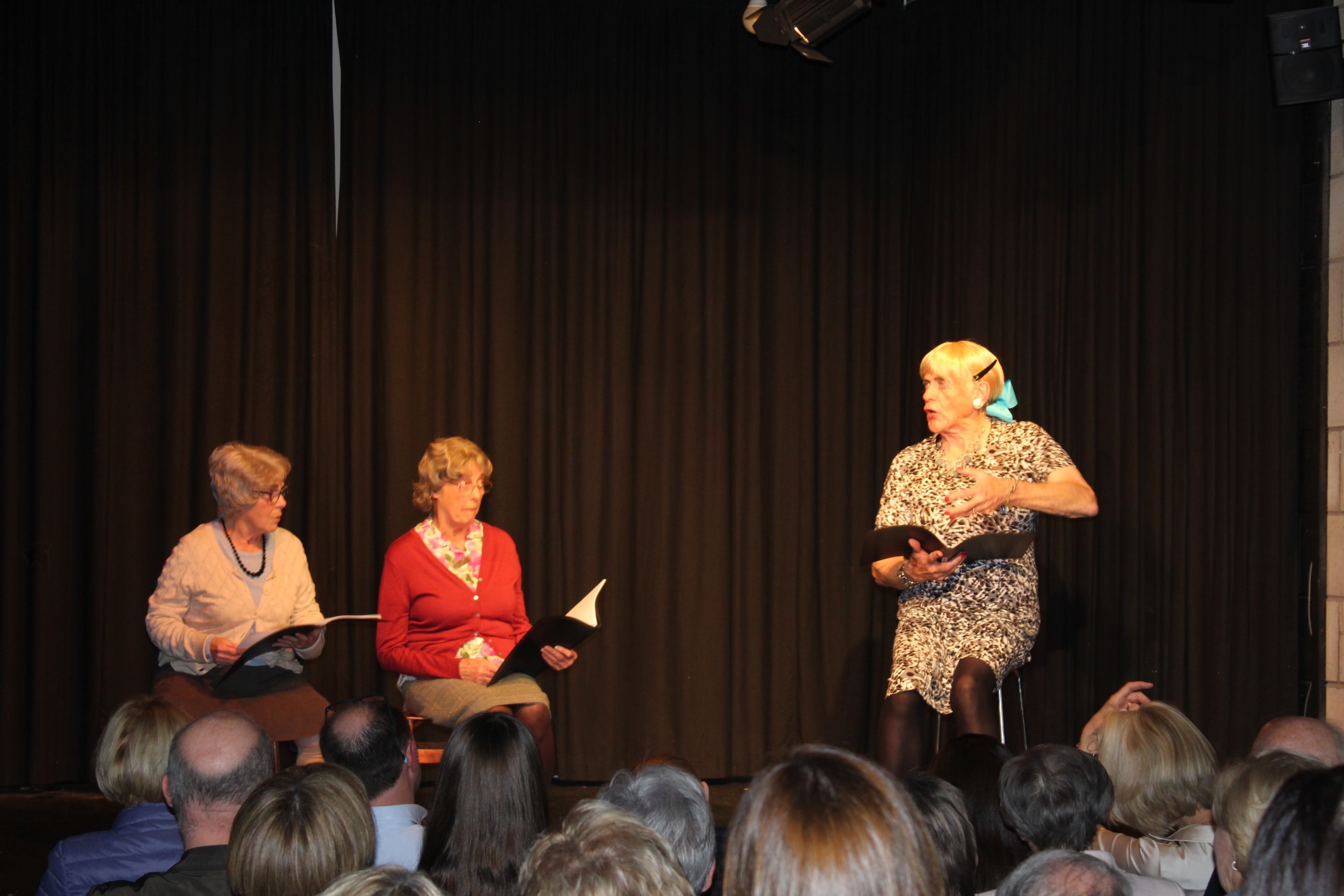 Malcolm, Pat and Madeleine in 'Someone to talk too' this wonderful one act by Michael Judge in Abbey Lane Theatre.