HOW LONG ARE YOU A MEMBER.

I am a foundation member. When I went to a meeting in the City Hall the audience was divided by an aisle down the middle of the hall and by religion left and right. We formed a group that had no divisions and has worked through some divisive times. At festivals adjudicators often mentioned the exceptional standard of cooperation in our team. A proud tradition.

I always wanted to be an actor being fortunate enough to have had apart in “I Want to be an Actor” a radio programme run by Cicely Matthews from which I think Jimmy Ellis may have emerged to run Z Cars. In the sixties I was looking after 2 children and needed to do something .James encouraged me to investigate this new group. I had a really rich experience over the following 25 or so years, learning and making friends with other actors who are still friends..

We made our home in various pubs and moved like gipsies from camp to camp until we landed first in the Loft in Jenny’s Row and finally in Abbey Lane, our permanent home, loved by us and our audiences alike.

MY FIRST PLAY was:

“The Crucible” produced by Larry Ryan, then teaching at the Christian Brothers school. The process of production was a drama in itself, with a magnificent outcome. Mary Knipe cut Puritan collars as we stood in the wings and broken ankles were a publicity opportunity. Stanley, Seamus and Larry argued passionately.

Is of course Abbey Lane with its closeness to the audience, but The Grand Opera House in Belfast runs it a close second .We were able to experience its intimacy with Factory Girls.

PART MOST PROUD OF;

Was Theresa in “The Hostage”. Playing a young girl in middle age was not easy- And I was supposed to sing! Then there was the humiliation of being told not to sing. I learned a lot. That was one of several productions that had a political background, both in the writing and in the reality simmering around us. Tensions ran high and sometimes benefitted the performance.

Is background music either unnecessary or played at a volume that obscures the words.

GREATEST LOVE; The family is my greatest love

Having grown up with rationing I have escaped a sweet tooth. What a benign diet Lord Wooten devised. We were really all in that together.

ENTERTAIN or be ENTERTAINED:

Entertain is best and if you can’t do it then to be entertained is next best.

Was in “The Actress and the Bishop” by Stuart Parker when Malachi’s line about putting on his cassock was marred by the fact that I as stage manager had forgotten to put it in position. Sorry again Malachi but your improvisation skills saved the day.

BOOK OF THE MOMENT;

As for the book on my kindle at the moment is “The Mirror and the Light”.

I think my favourite album might be a compilation of all the songs in the plays we have performed. Anyone take it on?

PARTY PIECE:  A poem of four lines.... or preferably three.

MANTRA FOR LIFE :  Hoping to find it!

Another influx of talented younger people to carry on the regenerative work of the current committee. Open mic (that spelling is my other hate)

Night has been so good for involving the wider community and has boosted numbers of people wanting to be part of our organisation. “ Our Town” so magnificently presented a couple of years ago was testimony of that.         All sorts of luxuries will be in place: a foyer ! Toilets backstage! Good disabled access and facilities! There’ll be no stopping us!

Shutdown will be past and we will be harnessing all sorts of technology in the cause of drama for all.

(Top left, Mary and grandson Rory concentrate on rehearsals of 'Our Town' in St Catherines college 2016.) 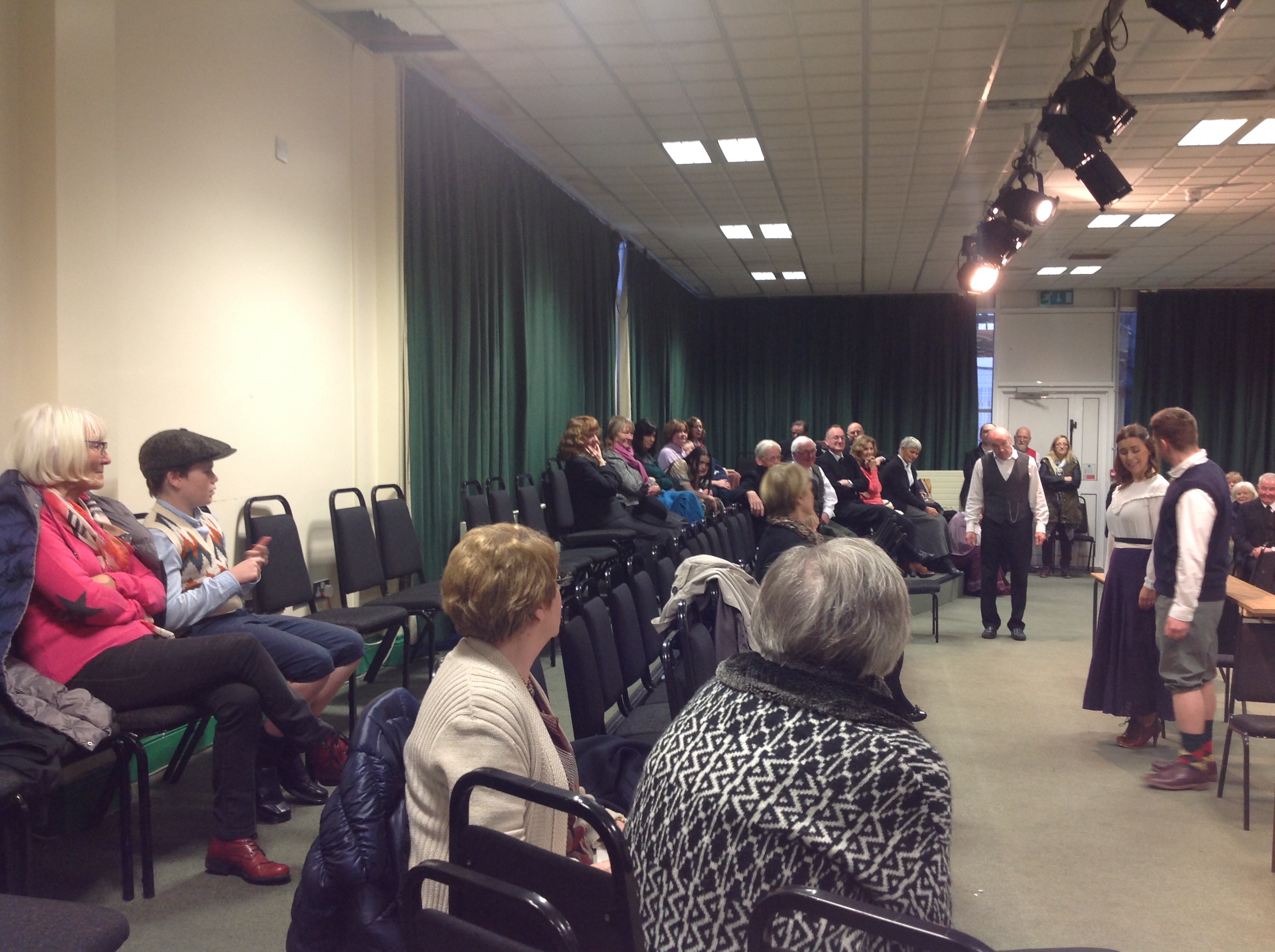